How to Organize Repository Interfaces to Support CQRS Architecture

Command Query Responsibility Segregation (CQRS) is a common architectural style in modern software, especially in distributed systems. The idea behind CQRS is that one model should be used to modify the data and another model to query the data.

Even if we are operating on a single database, it makes sense to separate command models from view models. Doing so will simplify implementation, because these two models are serving a different purpose.

Command model is heavyweight, loaded with domain logic. It comes with high construction cost, thanks to dependencies and relations to other models. Command model allows us to perform operations that belong to domain logic. It relies on encapsulation to make better use of object-oriented concepts, leading to maintainable, flexible and more powerful domain layer implementation.

Query model is lightweight. Its only purpose is to convey information to the presentation layer in the most straightforward way we can find. View models normally load their content from a view, rather than a table. It makes sense to perform all the joins and projections in the database itself, and then expose the data to the query stack in a plain tabular form. That would simplify the application and make it easier to load view models and transfer them towards the presentation.

From this analysis, it comes that CQRS architecture does not necessarily require total separation of command and query stacks. In medium-sized applications, in monolithic applications that operate on a single database, it is still possible to develop in spirit of CQRS. All it takes is to make a clear distinction between operations that are changing the data and operations that are querying the data. In order to implement those two kinds of operations, we need to have classes that are dealing with commands kept separate from classes that are dealing with queries.

Adding Repositories to the Picture

If we suppose that the underlying implementation of the infrastructure relies on Repository pattern, we can then make clear distinction between repositories that support command models and repositories that merely feed query models. This distinction is important because interface of the repository must be able to convey its purpose clearly. We don’t want to be able to attempt to save changes on a query repository.

During the analysis, we found that consumers have certain requirements on repositories. Here is the list of conditions under which repositories were used:

As the result of this analysis, below is the entire diagram showing the hierarchy of interfaces which were implemented in the end. 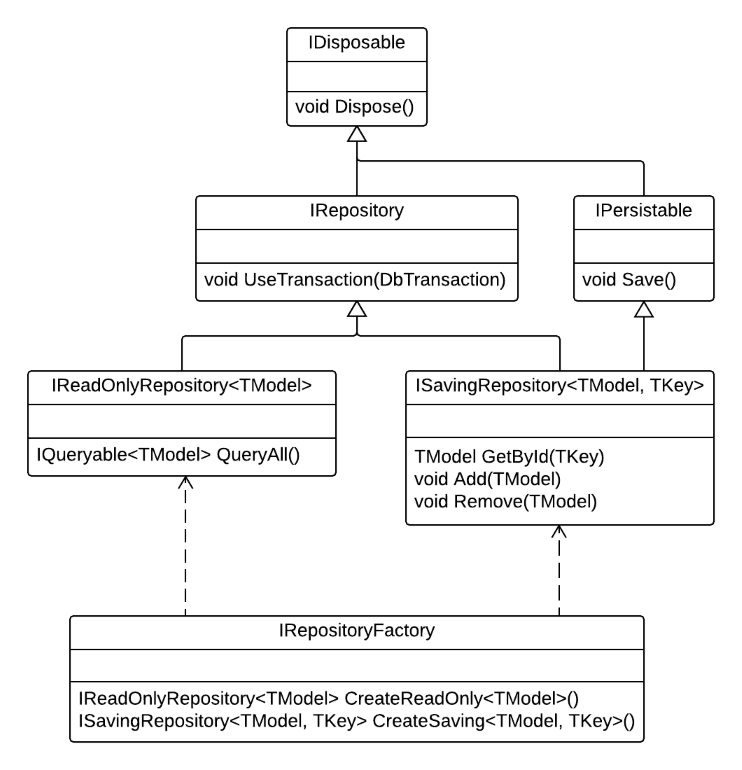 With this organization of interfaces, we could easily support all operations that were required:

In addition to basic CRUD scenarios, this structure also allows the command stack to wrap entire process in a transaction, because both read-only and read-write repositories expose UseTransaction method.

Command stack can save changes in all subordinate repositories by looking at those that implement IPersistable and then calling their Save() method. This simplifies the operation, because the consumer doesn’t have to know which repositories are operating on database tables and which on the views – it is the IPersistable non-generic interface which gives them out.

Similarly, the consumer doesn’t have to know the underlying model in order to wrap operations in a transaction. UseTransaction() method is implemented at the level of general IRepository, which is also not generic. This means that transaction management can be safely separated from model management and it can be turned into a general operation which doesn’t know the underlying model.

In this article we have seen one possible organization of repository interfaces which supports command-query separation.

You can use this design either as a ready-made solution, or as a base from which another custom design could be derived, such that you can which better suits your needs.